Where to start?  Still shooting for over 140 characters, and so an update of the weekend.

Friday was the 5yo’s birthday. I opted to celebrate it for the weekend with him and the rest of the fam instead of chasing fitness at a race I did not have enough of that commodity to do well in.

But the race proved fortuitous as there was a friend of a friend of a friend (really!) who was coming down to race from Boise. I had been looking at a bike that was listed in the Boise Craigslist* that had been on my mind for about 18 months. I first got interested in a Xtracycle when the privateer [1] pointed me to them. He didn’t have one yet, but was thinking of building one. He eventually made one out of his Stumpjumper [2] and I got to ride it at training camp last year. Last Interbike we spent a fair amount of time looking at the Xtracycle [3] booth… and the surly booth. Surly makes a bike with an integrated Xtracycle called the “big dummy [4]”. I was in love.

I have aspirations of building it with a rohloff and son hubs on large marge rims… but all out the door that is an almost $5k proposition. And with two little boys who may or may NOT be too keen on being schleped around town on it, seemed a big nut to crack. I bided my time and looked and looked for a good deal on a used one.

*Tangent – how to find what you need when your local craigslist doesn’t seem to have it? well CL does a nice favor for us all in the way they localize the site to a city. instead of craigslist.org/ [5]<your city name> they choose to use the city in the prefix of the url ala <your city name>.craigslist.org [6]. What does that mean to you? It means that you can do a google query over all of the indexed craigslist via the following search term “big dummy site:craigslist.org/bik/ [7]“ returning results of “big dummy” within all the CL bike listings. Cool eh? I digress…

Bike people rule. The price of the dummy in Boise was in the sweet spot, but I just couldn’t bring myself to drive both directions to pick up a bike that would help me not drive.

So what does any self-respecting bike dork do with a brand new (to them) bike? Take half of it apart! I pulled the bars, stem, grips, seatpost and saddle off and put some stuff I had around (kinda waiting for the dummy) on it. I still have some other immediate changes, but I didn’t want to tear into shifters for wont of a desire to actually ride it this past weekend. 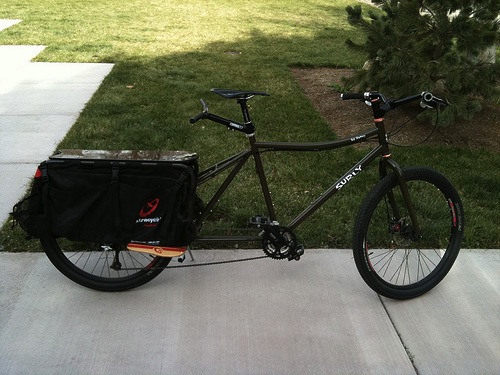 I also had found the stoker stem on CL for a deal @ $25 and with the old mtb bar, the kids had a place to hold on – for now. I few trips around the block and the neighbors wanted to try it out: 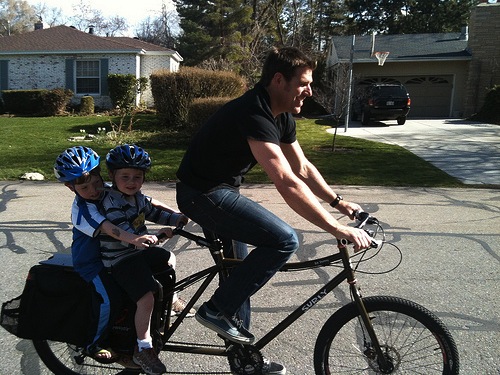 Sunday, I took the 6yo to the park with basketball, picnic lunch and toys on the back. Today we ran our sole errand on it, a 6.2 mile jaunt that was made into an adventure and almost spoiled with the weather. Sorry, no pics. I chose not to dilly dally on the way home and potentially get wet/cold/snowed on on the first real task given to the dummy.
I doubt that tomorrow will be car-free with the weather forecast and the kiddos (sorry, I am not hard core), but the rest of the week looks good.

The kids love the bike’s name “Dummy” and today there was already a request to be picked up from school on the Dummy. Dunno how long that will last, but if they are still into it after the newness wears off, I will be ecstatic.

I guess I should write about P-R* and the #reasonsGeorgeDidntWinParisRoubaix context, but I will save that for another 700+ words another time this week.

*And an initial tasting of the Saison that is bottle conditioning… a little flat, but as to be expected 6 days after bottling…more later.